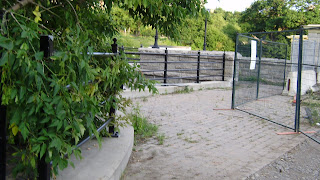 view from temporary path towards north end of Pooley's Bridge 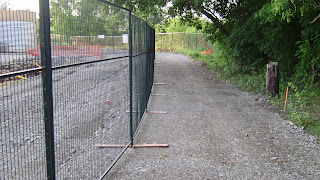 view north along the temp path towards Wellington

-
Pooley's bridge is an historic stone arch bridge over the aquaduct/tailrace at the foot of Bronson hill. It permits pedestrians and cyclists direct access from the downtown via Commissioner St (that part of "Bronson" that extends downhill north of Albert) to LeBreton Flats. It was renovated and restored a few years ago, for pedestrian and cyclist traffic only, but then was promptly closed when Fleet Street was closed to public access during construction of residences on LeBreton Flats.
-
I have been part of the chorus of people nagging the city and NCC to reopen the bridge, especially since construction of housing by Claridge seems to be going so slowly. My last kick at the cat was to nag the NCC and City in preparation for Bluesfest, since it made a direct and easy access to the site from the downtown.
-
Its too late for Bluesfest, but today I discovered that the extension of the NCC pathway (subject of a number of previous posts ) on the north side of the aquaduct directly behind the new condo tower, is nearing completion. The gravel bed is down, and stakes mark the final asphalt grade. To my surprise, the path does not end at the mid point behind the building, but suddenly narrows to a 6' path that skirts the construction fences and opens to the north end of Pooley's bridge, which is once again open for traffic.
-
Within a few days, it should be paved, and this valuable link will be open again. Note that cyclists and walkers will not directly access Fleet St from the north end of the bridge, but will skirt around the yellow condo at 200 Lett St and be delivered either to Lett St a few meters north of Fleet, or directly to new Wellington Street.
Posted by Eric Darwin at 9:12 PM