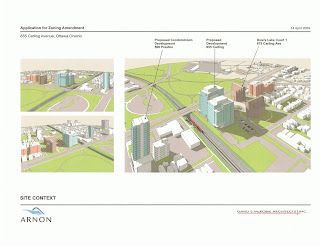 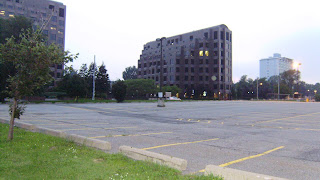 855 Carling is a parking lot bounded by the OTrain Carling Station, Champagne Avenue S, and Carling Avenue. Immediately west of the site is the CMPA office buildings and beyond that is the Merion Square townhouse and two apartment towers being built by Domicile. The site is currently used as a park and ride lot for the Civic Hospital. The lot is owned by Arnon Developments, which tore down Campbell Steel and related industrial works on the site a number of years ago. The photo above is taken from Carling Ave near the Otrain Station, looking northwest.
-
The planning document excerpt shows the site viewed from further north and east of the site, with Carling Avenue running left-right across the centre of the picture and the OTrain running top to bottom.
-
The Arnon proposal is seeking not so much to build two office towers, the tallest one 15 floors, as to get the City to agree to the size of building, floor area, and location. If approved, Arnon will then consider whether to build an office, residential, or mixed office-residental building(s), and when, if ever to build them. In short, they feel the time is right to lock in an upzoning of the site.
Something similar was done for the theoretical condo tower on Preston at Sydney. Once rezoned, the proponent went away, there is no sign of any intention to build the condo, the owners wanted to strike while the City is readily approving upzoning. Sadly, Arnon is proposing upzoning for its theoretical building based on the proposed height of the unbuilt theoretical building on Preston. Only Domicile is actually building anything in the area, although Charlesfort and other developers are knocking on doors (metaphorically and physcially) throughout the area. The recent site cleanup of the old Esso at the corner of Carling and Preston has readied that lot for redevelopment.
-
I cannot blame the developers for doing what they want to do. I do regret that the City has dropped the ball, letting the Carling-Bayview Community Development Plan get stalled. This CDP was well on its way to completion when the city put it on hold, because the N-S LRT line was postponed. I, and members of the Dalhousie Community Assoc (representing the neighborhood immediately to the east) have been nagging the City to get the plan restarted, precisely so that all the properties ripe for rezoning along the OTrain Corridor could be planned in a coherent manner. The Arnon proposal is not necessarily at odds with what the CDP proposed, but it misses several opportunities, such as a direct link to the OTrain, possibly covering the Otrain cut to increase the lot green area, connecting bike and pedestrian networks, etc. The City should postpone the rezoning application until the Carling-Bayview CDP is completed (which should be quite quick that much of it was already done).
Posted by Eric Darwin at 10:07 PM