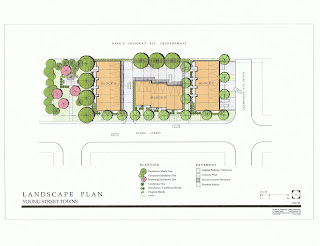 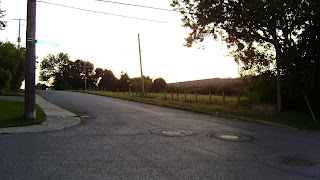 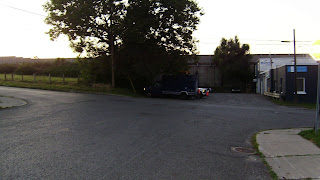 Champagne S will extend a hundred feet more to the Qway right of way, presumably it will eliminate this parking lot

rendering of houses seen from the south

The vacant property runs along the south side of the Queensway, starting near St Mary's Church, opposite the City Living housing, and running down towards the OTrain railway cut. It has at varies times been proposed for townhouses, apartments, or Qway off ramps. At the foot of Young is a pedestrian bridge over the cut to the other segment of Young, where Young St Motors is located, and then opens onto Preston/Little Italy right at the Qway by Ciccio's Cafe.
-
The latest proposal is for 18 townhouses. The center group faces Young Street, with a rear yard parking access; the west group faces a small parkette created out of a closed street right of way, with access to their ground level parking spaces from the same courtyard; the east group also runs at right angles to Young, but has garage access from an extension of Champagne Ave S (which will remove the small parking lot serving the commercial building between this lot and the OTrain right of way).
-

All units have ground floor parking garages, most also have second car parking in their private driveway (the west units won't have the second parking space). The unit design is modern, boxy, colorful, affordable, and aimed at young, first time home buyers. The properties have no yards, but have two balconies. About 1400 sq ft.each.
-
Apparently the upper floor windows fall slightly below the top line of the Qway fence, but since the Qway slopes down toward Preston, they will have views of the traffic in the distance.
-

The site plan is quite clever, delivering three very different amenity sets to the buyers: the west have only one parking space, no driveway, but face a parkette; the middle set faces a street in a traditional street setting, and is furthest from the Qway; the east set has a private driveway to a public street rather than a courtyard.
-

The units will most likely be air conditioned and may have filters on the air exchangers to reduce airborne dirt and pollutants.