What a difference a block makes ... and who your neighbors are 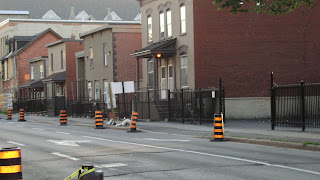 midway between Cumberland and King Edward 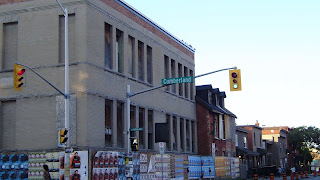 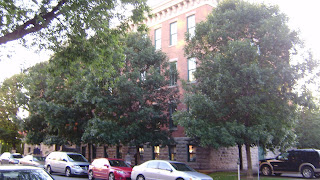 These three pictures are taken on the same street in the Market, a few hundred feet apart. The red brick condo is a full block west of the Shepherds of Good Hope. It is a renovated building, open green lawn, no fence.
-

The gray building is gutted, windowless, abandonned. It is one half block east of the red brick condo in the other picture, on the other side of Cumberland cross street. The street is just as busy ... it's still far enough from King Edward to be quiet living space, but it has been a blot on the streetscape for a long time.

The difference is that the unrenovated building is on the same block as the Shepherds. That the shelter has a deleterious effect on its neighbours is obvious to anyone using the street. The houses have tall, functional metal fences in front of them, some with locked gates. Verandahs and porches are modified to be unwelcoming. To walk or cycle on the street is unwelcoming if not scary, in daylight. I would not venture there at night.

Yet it seems to be only the street the Shepherds is on that is impacted, ie the block between King Edward and Cumberland. The adjacent blocks north, south, and west appear unaffected. I talked to friends living in the Market, active in community affairs, and they confirm they go out of their way to avoid the blocks around the Shepherds. I gather the Sally Ann shelter has a negative impact on the neighborhood further south.

The "homeless" need shelters or housing. Neighborhoods do not need blight. How to reconcile the two? First step might be to measure the impact zone around the shelters, to quantify the effect. We cannot fix what we don't measure.

No other neighborhood is going to "volunteer" to take a shelter into its area, not when the impact is so obvious. It looks like the Market is stuck with them, and solutions must be found there. Unless the shelters expand by stealth, buying up a smaller building somewhere, installing a "few" clients, then expanding once its foot is in the door... Or, a new approach can be tried, with closely supervised living accomodation integrated into a neighborhood. That approach works in NYC, but a key there is strict supervision and high expectations from the tennants, which I doubt our ever-so-tolerant social agencies are able to provide.

My neighborhood had a shelter for a few years, the "homes for the homeless" project in the Dewar/Hasenack era. A cluster of city-owned properties were set up on Preston Street. The homeless did not like being so far from the "action" and the City ended up providing a daily taxi service to move them from the market to Preston each night. Blue Line loved it. Media coverage of the project was negative, and the project thankfully died when the houses were demolished to build the No 2 Fire station.
Posted by Eric Darwin at 10:35 PM