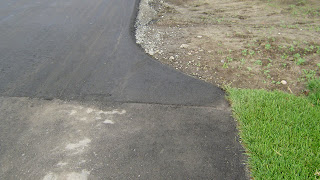 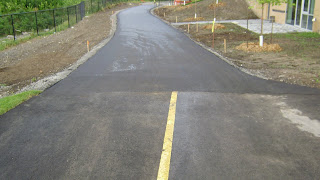 what will the yellow line do?

There must be a law or maxim somewhere that the more planning is done, the more expensive the administration, the worse the results.
-

A few blogs ago I lamented the apparent mismatch between the NCC section of the bikepath from new Wellington that goes south along the aquaduct behind the new Claridge condo at 200 Lett Street in LeBreton Flats.
-

I still cannot believe that despite all the planners, all the coordination, the high city taxes ... that the City-spec'd path is two feet narrower than the NCC path it continues.
-

I remain curious as to what the yellow line will do ... jog to the centre of the city section? continue straight on leaving one lane wider than the other? Or maybe the city won't have a yellow line, because their path isn't a bike path, its a pedestrian only path?

Edit: 25 August 2009: as noted in the comments, it is an illusion that the NCC path is wider than the City path. Both measure the same with a tape measure at several points along the paths. However, there is a side path joining the NCC path just a few feet north of the switchover to City path, and the problem lies at the junction. Basically, the NCC contractor did not build a proper radius or curve on the side path and it joins the NCC path rather sloppily, leaving only the few feet from the where the paths join to the joint with the City path being too wide by about a foot. The correct solution is to trim the NCC path back for about 10' on its radius so it blends into the main path better. So, the City and NCC are coordinating their paths correctly. Whew.
-Eric Darwin
Posted by Eric Darwin at 9:42 AM