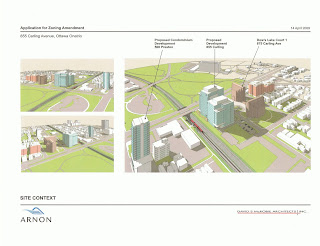 The Ottawa Civic Hospital Community Assoc. held a meeting on Tuesday evening. On the agenda was the 855 Carling Ave project proposed by Arnon Developments. They already own the two red brick office towers on Carling between Preston and Rochester (a site I vaguely recall might already have planning approval for a third tower?)
-
From their planning documents I had concluded in my post a few days ago that this was a rezoning well in advance of any project, but at the meeting it became clear that this project might proceed in the near future, and my interpretation was wrong. The new building will be close to the lot line on the Carling side, but the lot line is set considerably back from the existing sidewalk, so the new building will be set back about the same distance as the existing CMPA towers to the west. If Carling is widened, perhaps in conjunction with a median LRT transit line, the hardscaping might get closer to the building, but until then it will be as suburban looking as the CMPA towers, which is a shame.
-
The proponent noted that the 800 car parking garage would operate for one office shift a day, whereas the existing 300 car lot on the site today operates for 3 civic hospital shifts (there is a shuttle bus and waiting shelters) so the traffic impact of the new building will be similar to what is there now. The new garage would be four floors deep, which is considerably deeper than the adjacent OTrain cut. Apparently there are talks with the City about extending the building excavation right out to the OTrain cut.
-
The rezoning and increased FSI for this site should not be considered in isolation. There is a Community Development Plan (CDP) neighborhood planning study for the redevelopment of the Carling to Bayview corridor (remaining old stuff from the railway era needs to be replaced with developments meeting current needs and the transit corridor opportunity) but the CDP was stalled when the north south LRT project was cancelled about 2 years ago. It is apparently getting going again (3 cheers ! something right from City hall !) and is the proper place to consider the height and FSI for this site, in conjunction with the other sites along the LRT
-
I am very concerned with the possibilities for squandering the transit oriented development opportunities presented at this site. The developer has a main entrance on the east side, adjacent the station, and he indicated he was amenable to connecting it directly to the station. Such a connection needs to be all season, weatherproof, and perhaps climate controlled to compete with the 800 car parking garage in this building alone.
-
But further planning is needed to access the CMPA buildings and Merion Square condos and the residential neighborhood to the OTrain/LRT to make it as convenient as possible. This might mean through-building access, or a link to Hickory Street pedestrian overpass over the cut. It is rare enough to find a lot of vacant land, ready for development in the next decade, right on top of a major transit station, and possibly the junction of two transit lines (the north-south and Carling LRT).
-
Keep in mind also the land south of Carling, currently a grass field, is NOT NCC parkland nor part of the experimental farm, but is zoned for high-density mixed-use development. The OTrain and LRT station needs to be connected to this site too, and that does not mean a crosswalk with push-button placebo, it means a proper underpass from the station to the south side, also accomodating the bike path.
-
The southmost anchor for development of that site is already there, but under threat, as the Feds are proposing to demolish the Sir John Carling building whereas it should be repurposed, perhaps as a condo.
-
The 855 Carling developer is asking for increased FSI. The City should not grant it without some price. In the earlier CDP process, I advocated for covering part of the OTrain cut near Beech Street to expand Larouche Park. This neighborhood is a park desert. This is a marvelous opportunity to double-deck the narrow OTrain corridor so we get both transit-oriented development and neighborhood improvement.
Posted by Eric Darwin at 2:25 PM