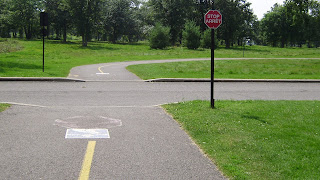 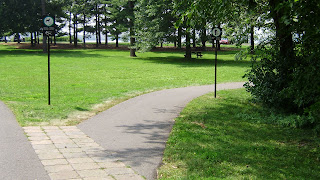 
There are a number of things that can be done to existing multipurpose paths (which I normally call bike paths, because that is how I use them) to make them more user friendly.
-
For example, a Remic Rapids the riverside path is congested with families visiting the ducks, geese, and sculptures, and others accessing erotic pleasures in the remaining shrubbery (I no longer see the city social worker at this site handing out condoms... ).
-
To deal with the volume of slow moving pedestrian traffic and through-traffic cyclists, the NCC installed a bypass around the most congested part. The path begins a few metres east of the road access to the parking lot, continues around behind the lot, and rejoins the path at the west edge of the parking lot. The yellow line and signage encourage cyclists to use it.
-
Both path segments are of similar length, and the inland one is much less busy so cyclists can build up some velocity. But then it is lost, because when the path crosses the access road to the parking lot, the cycling path bumps over both curbs, and there is an explicit command to yield to car traffic accessing the parking lot.
-
If the segregated path is to achieve its potential, it must cross the parking lot access road without a curb, and vehicles must climb a raised crossing/speed hump which will self-police vehicles to yield to cyclists. Thus cyclists will be attracted to the bypass instead of being ticked off at an inferior path option.

(as an aside,in my experience the vast majority of motorists yield to cyclists at these crossing points, Ottawans are so polite ... but with tinted windows and lack of signalling, cyclists cannot depend on cars to stop, so they loose momentum, stop, then get waved on from a stopped position, making the stop mostly for nothing...)

A similar crossing is possible at New Orchard, where once again the parking lot access road is inexplicably given the right of way over the through traffic on the cycle path. Unlike the Westboro Beach access road which is short, the New Orchard and Remic access roads have several car lengths between the Ottawa River Commuter Expressway and the bike path, so there is not excuse for the cars not to be able to slow down and yield the right of way. A good steep bump over the bike path would make the intersection self policing.
Posted by Eric Darwin at 9:46 PM