Why the wider corner ? 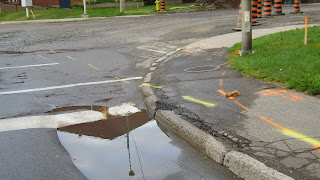 SW corner of Albert/Preston.Note the red line that cuts off the sidewalk.
I really do think our city has too many roads, too wide, and despite the claims of being cycle or pedestrian friendly, too much of what gets done is car traffic friendly first and foremost.
-
I recall working with city staff on a project for Booth Street with the specific mandate to calm traffic and to reduce the volume of traffic on the street. The engineers/planners came back with ideas to widen the intersections, add additional lane space, etc.
-
Now Preston Street, after 16 years of planning and lobbying, is being rebuilt. There will be two through traffic lanes, and generally one parking lane (which alternates which side of the street it is on block by block). At the intersections, there are three lanes for traffic, as a left turn centre lane is added on each side of major intersections.
-
Yet at the corner of Preston and Albert, this new narrowed street alignment from four to three lanes somehow generates a WIDER intersection than before. Pedestrian death and injury hazard increases with intersection exposure. Lengthier crosswalks = more exposure >> more death. In the attached photo, a red painted line shows the excavation line for the new curbs. Pedestrians crossing the new, narrower Preston at Albert will have a longer, more dangerous crossing than before.
-
Surely an oversight? Ha, its deliberate. Members of the public advisory committee on the project, the BIA, and the Councillor all objected to the wider intersection. The planners insist on it. Why: to make it easier for 55' tractor trailers to make the turn from the right lane. No one can ever remember seeing a tractor trailer make this turn. What would they be carrying? Petrified silly servants from Tunney's Pasture? Beer from the Holland Cross outlet?
-
Under the excuse of making roads "safer" our planners continually make them flatter, wider, straighter, overlit, junior freeways in training. Of course, cars go faster, making the environment less safe, not more safe.
Posted by Eric Darwin at 11:24 AM