If you get this message, you are still subscribed to or are reading WestSideAction at the OLD blog site.

There is a new post at the new site, and it will not appear at this site! You are missing my post on why we need a downtown transit tunnel, no shades of Gray!

Here's what to do:
Go to http://www.westsideaction.wordpress.com/ and on the right side column, the RSS buttons. Click to start your free subscription for the posts only, or the posts and readers comments. If you subscribe, all new posts are sent to you automatically.

Once you subscribe to the new .wordpress location of WestSideAction, go back to the old site at http://www.westsideaction.blogspot.com/ and select the RSS button there to unsubscribe. Then you wont get any more of these messages telling you the site has moved.

Two steps: sign up at the new site, unsignup at the old site.

The new site will have all the new posts, and all the old ones live there too.
Posted by Eric Darwin at 10:48 AM No comments:

WestSideAction has moved from .blogspot to .wordpress.


Please subscribe using the RSS button there as future posts will be from the http://www.westsideaction.wordpress.com/ site only.


Sorry for the errors and omissions and oddities that appear for the next few days as I try to set up and get familiar with the .wordpress account.

As always, comments and suggestions are welcome.

I had thought Ottawa was perhaps unique in wanting to install fake trees on concrete foundations along Bronson rather than plant real trees with real roots.

The City is reconstructing Bronson next year. In their rush to pave over every possible inch of Ottawa space for rush hour commuters to head over to the greener pastures of Pointe Gatineau or out to Greely, they discovered they had no room left over for pedestrians, cyclists, transit users, residents, adjacent businesses, kids heading to school or grandma heading to the lawn bowling club. No room for bus shelters, benches, or trees ... so the City proposes installing fake trees, as they don't require room for roots to grow, are immune to salt, etc. See the second illustration below for a sketch of the proposed artificial foliage, and don't forget those yellow and red cars are speeding along at 70 or 80, and the benches are on private property only if the owners cede the space to the city. 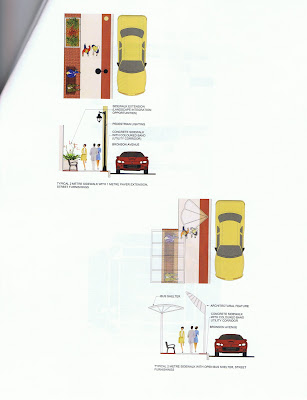 I had thought Ottawa was perhaps unique in wanting to install fake trees on concrete foundations rather than plant real trees with real roots. Alas, I was wrong. Regina is doing us much better. They are chopping down real trees to replace them with fake trees.

Victoria Park in downtown Regina is being refashioned. Supposedly, work crews digging to plant trees discovered lots of gas mains, wiring, etc in the area (who knew!?) and so the City is proposing "shade screens -- large metal frames of self-weathering steel that will rust to a durable orange-brown, linked with curving reflective strips of shiny aluminum" (National Post, pg A6,"Residents liken park design to Nazi camp").

The story goes on to describe residents as "disillusioned by the loss of trees and ... an emblem of tradition lost to modernism, and of nature lost to the city".

There are a couple of themes here worth pondering upon. One is the desire of City departments to get rid of real trees, with their inconvenient growth and variability and seasonal change. We have seen our cities steadily remove all large trees, and now apparently the small ones have gotta go too.

The other theme is the underground utilities. On Bronson, for example, we requested the City require new and reconstructed utilities be burried deep enough so trees could be planted. Oh, the looks of horror on their faces ... they had no intention ever of requesting let alone requiring utilities be located more than 36" deep. The role of landscaping was to fill in the left over spots, if there were any. That a street might have stakeholders or influence other than for utilities and commuters was unthinkable. Such unthinking gave us ugly Bronson in the 50's and such unthinking still prevails with (some) city staff and consultants today, over a half century later. Ugliness and disutility designed in from day one.
Posted by Eric Darwin at 10:05 AM 1 comment: 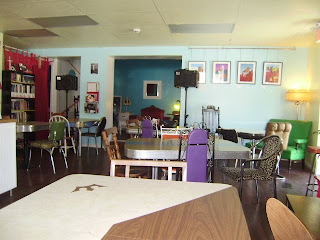 Raw Sugar coffee and tea house on Somerset at Cambridge is totally decorated in chrome tables and chairs, 60's fake leather, there are the appropriate figurines and a Hammond organ.

Yesterday, it was in my aunt's house, today it's a museum display. But the brownies still taste good.
Posted by Eric Darwin at 8:10 AM No comments: 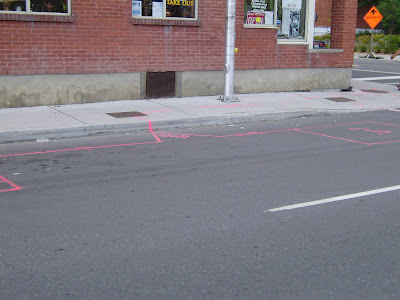 A little while ago I posted this picture of the "loop" wires that were to be installed at the Preston intersection with Somerset. The street was also scheduled to be dug up ... would the street diggers remove the street before the wires got burried, or would the wire people install the wires only to see them dug up the next week ... 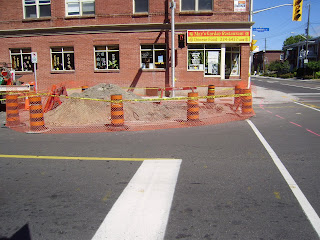 The diggers won. Bell and Enbridge are busy doing their infrastructure stuff before the sewer work is done later this month. So the traffic people won't find a street there to put their loop into.
Unless ... Bell patches the street and the traffic folks install it between the Bell work and the sewer work ....
Posted by Eric Darwin at 8:05 AM No comments: 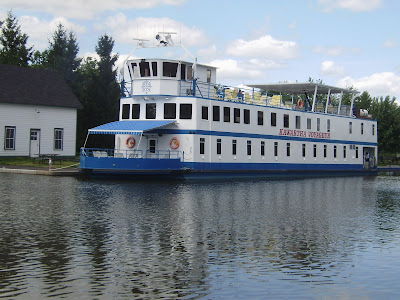 The Kawartha Voyageur seen here at Hartwell Locks, near Carleton U.

If you think it looks too big to fit through the canal locks, you are right. It is too long. However, they roll up the awning at the front and the entire bow section swings up on a hinge, revealling the boat to be the square barge that lies beneath.
Posted by Eric Darwin at 8:05 AM No comments: