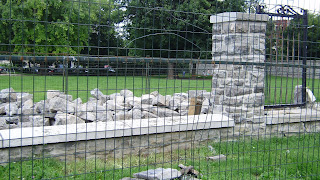 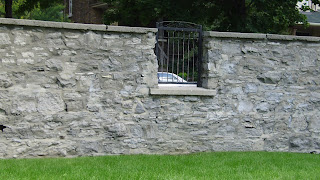 existing wall, 6-8' ft, depending on location and which side of the wall 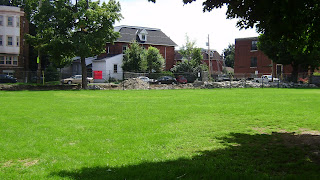 wall removed, south side of park, along St Frances St.
St Francois school in back right

There is a large green park behind St Frances church, the Hintonburg community centre, and St Francois school. Formerly religious grounds, the property is enclosed on the east and south by stone walls. About 25 years ago, when the City acquired the lands, window slots were cut into the walls and a few sections lowered to permit oversight into the park from Fairmont and St Frances avenues.

A year or two ago, the wall on the south side was deemed unsafe, due to some bowing in the wall. It was taken down and rebuilt. Stonemasonry at this scale does not come cheap.

Now, the newly rebuilt wall has been torn down again, is being topped off at curb height, about 18" above the grass. I am told it is because some people thought the park unsafe.

I was surprised at this, my son went to St Francois for 9 years - daycare, pre-mat, mat, gr1-6. Only once did I see drug activity taking place in the park, right behind the Hintonburg centre. I suspect the park is safer today, as a group of stacked townhouses was just completed on the west side of the park, overlooking the grounds.

At a recent meeting on drug use in the neighborhood, Hintonburg reps were unable to identify any locations where hard drugs were openly/publically being taken, so I guess the park is not a notorious drug den of iniquity.

Note that as part of the park renovations, the existing play structure will be relocated/replaced about 30m south of its current site, for the benefit of the new townhouses.

This turn of events at St Frances park made me wonder about the proposed Dominican Gardens park off Empress. The Dalhousie Community Assoc and concerned neighbours are trying to get the City to aquire the stone walled treed garden on the south side of the Domican College and St Jean Baptiste church. A part of its charm is its seclusion, and the heavy stone walls, about 7' high, border both the east and west sides of the gardens. Will they come tumbling down if the City does acquire the land?
Posted by Eric Darwin at 9:46 PM