How Wide is a Bike Path ? 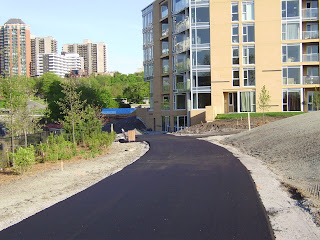 in May, NCC path is laid, looking south from Wellington 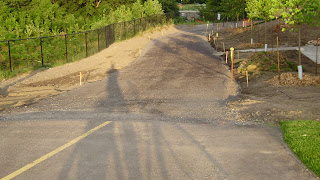 Now Claridge may not be the fastest developer in town, but he is finally implementing the landscaping around the 200 Lett Street yellow-brick condo tower on LeBreton Flats. The path behind the condo, along the tailrace/aquaduct, is being laid and connected to the NCC path. The path is laid to City of Ottawa standards, as spec'd to Claridge in the subdivision agreement.

Look at the not-yet-paved gravel path in picture two, which extends the NCC path. Notice that the new path is at least one foot, maybe two feet, narrower than the NCC path. Yup, the NCC apparently builds its paths to a more generous standard than the City, and the two bodies can't quite coordinate when they build different sections of the same path...

Unless ... the NCC built a multipurpose path, which most of us (in)correctly call bike paths, and the city is planning a pedestrian only path ... it wouldn't surprise me if the two layers of government are that far out of sync ... after all, when the City built the path along the north side of Albert from Bronson to Bayview, they paved it a foot or so narrower than their 'official' bike/multipurpose paths, so they won't paint a yellow line down the middle, and have threatened to put "walk your bike" signs on the path. All this, even when they were advised by a number of parties even before the gravel roadbed was put down, that it was too narrow, but apparently four months notice before the asphalt was too late for the city to fix it, so cyclists and pedestrians are stuck with a nebulous "what is it" path that looks like a bike path but maybe is and maybe isn't... when the asphalt goes down on the path along the tailrace, I'll measure it and the NCC path and compare.